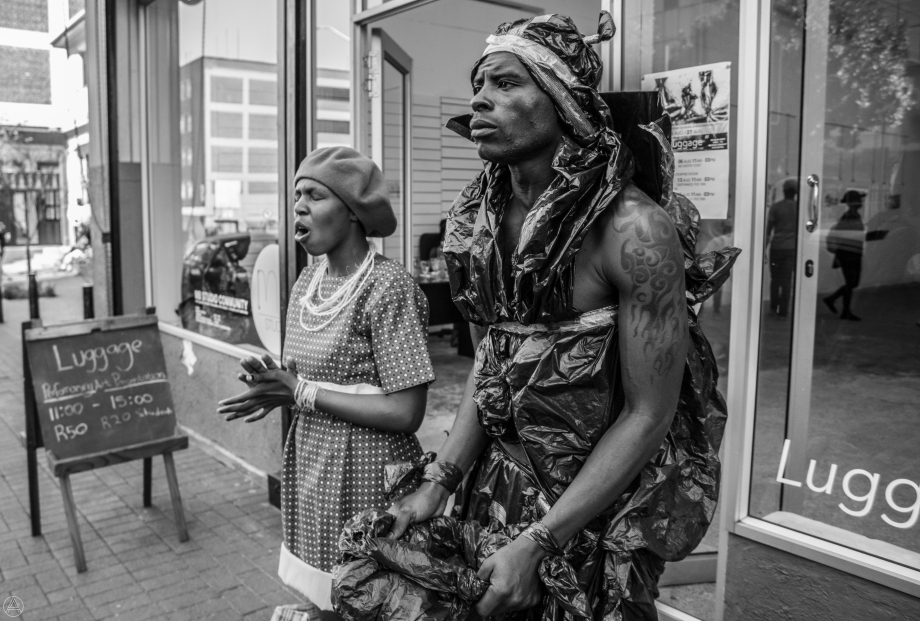 As soon as you walk in, you are greeted with large woven plastic bags that occupy the center of the gallery. You can’t help but feel their overwhelming presence, along with striking sketches placed on the walls of the MB Studio Community Gallery in Pretoria. We attended the two man exhibition, “Luggage” by Nkhensani Rihlampfu and Michael Selekane which was curated by Sarah McGee. On this particular opening we were given an overall art experience, as the Performing Arts Department lead by The O Zone Felaz, gave their performance interpretation of the exhibition’s concept.

Luggage sets out to unpack the emotional, mental and physical weight of our country’s, our community’s and our own personal luggage. The show was titled Luggage instead of Baggage, as the connotations associated with the word baggage are generally negative.

Michael Selekane took a different approach to his ideas behind luggage, as he drew from his personal connection to the concept. He reflects on the artist’s emotional state as an individual, and what they go through as they migrate across the country; while Nkhensani Rihlampfu takes a positive stand on the concept and gives us the weight of both our country’s and families’ Luggage, exploring how often those responsibilities are carried on the shoulders of a handful of individuals. These two approaches give us a full expression of the idea of luggage. The concept speaks to many of us and allows us to confront the luggage which we often face, as well as the luggage that we bring and carry as individuals.

The performing artists extended the concept with an outstanding physical theater performance artwork. The artists aimed to express ideas of the effects of this “luggage” on the everyday man, the fatigue from having to bear a heavy load and endure the weight placed on them. The piece consisted of harmonic melodies often sung to keep the spirits of the people up during such times.

Luggage is a well-produced exhibition and a new reflection of contemporary art. The exhibition is open until the 27th of August 2016, so head out to MB Studio Community and enjoy the living artwork.